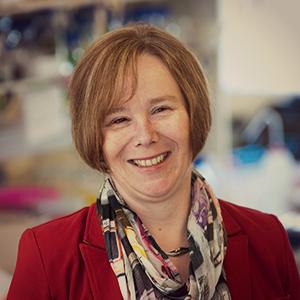 Sheena graduated in Biochemistry at Birmingham, completed her PhD at Cambridge under the supervision of Professor Richard Perham, and then carried out extensive research at Oxford before becoming a lecturer at the University of Leeds in 1995. She became a Reader in 1998, a Professor in 2000, Deputy Director of Astbury Centre for Structural Molecular Biology in 2009, and its Director in 2012. She has run a large and successful research laboratory at the University of Leeds, and is now the Astbury Chair of Biophysics.

Her research is focused on fundamental structural molecular biology, specifically the measurement of the conformational dynamics of proteins and the elucidation of the role that these motions play in protein folding and misfolding in health and disease. Working on both soluble and membrane proteins, she and her group are using a wide range of biophysical methods (including NMR, mass spectrometry and single molecule methods), combined with other approaches spanning molecular dynamics simulation to cellular biology, to determine how proteins fold in all-atom detail; the mechanisms by which proteins misfold; how dynamic excursions enable proteins to self-associate into amyloid fibrils; and the complex macromolecular assemblies associated with some of the deadliest human diseases. They are now exploiting the fundamental insights gained to develop new strategies and routes towards combatting diseases associated with rare conformational states of proteins.

She is a Fellow of the Royal Society of Chemistry and of the Academy of Medical Sciences, and on 1 May 2014 become a Fellow of the Royal Society, the highest academic accolade in the UK. Her prizes include the Biochemical Society Colworth Medal in 1996 and the Protein Society Carl Branden Award in 2013. She has published more than 200 peer-reviewed papers and has spoken at 127 invited lectures at national meetings and seminars, and over 160 invited lectures at international conferences in 20 countries.