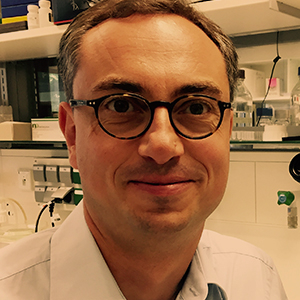 Dr. Andreas Fischer is head of the Division Vascular Signaling and Cancer at the German Cancer Research Center (DKFZ) in Heidelberg and adjunct professor at the Medical Faculty Mannheim of Heidelberg University. He is a trained physiologist and specialist in clinical chemistry who combines basic vascular research and clinical practice at Heidelberg University Hospital. He graduated as Doctor in Medicine in 2003. During his postdoctoral work on angiogenesis at the Biocenter Würzburg and the Center for Biomedicine and Medical Technology in Mannheim he became interested in mechanisms how endothelial cells instruct the behavior of adjacent cells. In 2012, Dr. Fischer started his own independent group at the German Cancer Research Center in Heidelberg where he was promoted to a Division head in 2017. He received several awards for his scientific work including the Chica and Heinz Schaller research prize and the Hella Bühler award for cancer research. The Fischer lab is currently studying how endothelial cells respond to physiological and pathological changes in blood plasma and their microenvironment and how this subsequently changes the transport of cells, hormones and nutrients across the blood vessel wall.