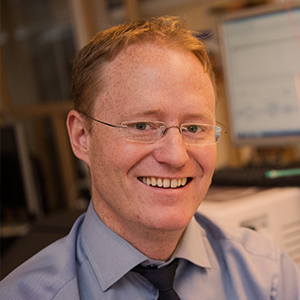 Björn Högberg is an associate professor and head of the division of biomaterials at the Department of Medical Biochemistry and Biophysics at Karolinska Institutet. He is a Knut and Alice Wallenberg Foundation Academy Fellow and an ERC Consolidator grantee.

Högberg’s research is focused on developing new methods and molecular tools for cell biology research using DNA devices, mainly DNA nanotechnology and DNA origami. His focus has been both in development of the basic technology and in applications to probe and manipulate cell signaling by cell surface receptor clustering. His research also involve using these novel devices for drug delivery in cancer.

Högberg earned his MSc in Physics at Uppsala University and did his PhD in Physics both at Chalmers University, where he started, and at Mid Sweden University where he graduated in 2007. After that he joined the lab of William Shih as a post-doc at Harvard Medical School and Dana Farber Cancer Institute in Boston, USA. He joined Karolinska Institutet in 2010 as an Assistant Professor at the dept. of Neuroscience and now holds a faculty positon at the dept. of Medical Biochemistry and Biophysics.