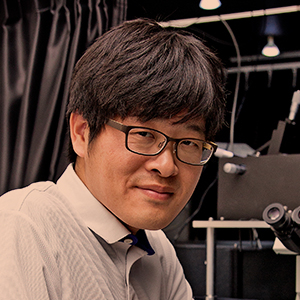 Chirlmin Joo studied physics at Seoul National University in Korea. He obtained his PhD in physics under the supervision of Taekjip Ha at the University of Illinois at Urbana-Champaign, USA. He studies a DNA repair process using single-molecule fluorescence techniques. During his PhD study, he advanced single-molecule techniques by innovating new tools including multi-color single-molecule FRET. As a post-doctoral fellow in Narry Kim’s lab at Seoul National University, he discovered novel proteins in microRNA biogenesis. In 2011, he started his faculty position in Department of Bionanoscience at Delft University of Technology in the Netherlands. He developed the first single-molecule pull-down technique (reconstitution of functional protein complexes at the single-molecule level) and applied the method to mechanistic studies on protein complexes in microRNA biogenesis and CRISPR memory formation.

In 2017, Chirlmin Joo took leadership of developing new techniques of “single-molecule protein sequencing” in a Dutch national science program (NWO-FOM Vrije Programme). His team aims at developing high-resolution single-molecule techniques that can, for the first time, determine protein sequences at the single-molecule level. Using single-molecule fluorescence and nanopores, his team is exploring the biophysics of protein translocation and will utilize it to develop a novel technology to determine the sequence of proteins. By analyzing proteins molecule by molecule, his team will be able to read the entire proteome, despite its complex nature and the wide dynamic range of abundances of cellular proteins. The new technology will be the first to create the opportunity for single-cell proteomics and real-time screening for on-site medical diagnostics.

In 2018, Chirlmin Joo was appointed Director of Kavli Institute of Nanoscience Delft. He is the co-founder of a startup company, Bluemics.