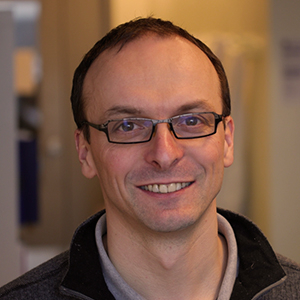 Dr. David Juncker stayed as a visiting scientist at the National Metrology Institute of Japan in Tsukuba from 1997-98. He conducted his PhD research at the IBM Zurich Research Laboratory from 1999-2002. He then pursued his studies as a Post-doc first at IBM Zurich until 2004, and then one year at the Swiss Federal Institute of Technology in Zurich (ETH). David started as an assistant professor in the Biomedical Engineering Department of McGill University in 2005, was promoted to associate professor with tenure in 2011, and became a full professor in 2016. As of early 2018, David serves as departmental chair of the Biomedical Engineering Department at McGill University.

David received a fellowship from the Swiss Academy of Engineering Sciences for a one-year internship at the National institute of Metrology of Japan from 1997-1998. In 2006, David was awarded a Canada Research Chair in Micro- and Nanobioengineering, which was renewed in 2011. In 2012, he was further honoured by being selected as Young Scientist by the IAP - the global network of science academies - and asked to represent Canada at the World Economic Forum, the Summer Davos New Champions Meeting in Tianjin, China, Sept 10-15th, 2012. In 2013, David Juncker was awarded a fellowship from the German Cancer Research Centre (DKFZ) and became a visiting scientist in Dr. Jörg Hoheisel's Functional Genome Analysis division at the DKFZ in Heidelberg.

David's current interests are in the development and use of micro and nanotechnologies for the analysis of proteins, nucleic acids and exosomes in liquid biopsies and single cells, microfluidic circuits for point-of-care diagnostics, as well as 3D printed and miniaturized organs-on-on-a-chip.