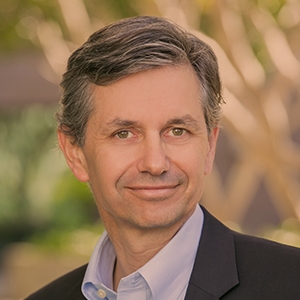 Frederic de Sauvage is Vice President of Research-Molecular Oncology at Genentech. He obtained his PhD summa cum laude from the Catholic University of Louvain in Belgium. He joined the laboratory of David Goeddel at Genentech as a postdoctoral fellow in 1990 and was hired as a Scientist in 1992. In 1994, Dr. de Sauvage's team at Genentech discovered Thrombopoietin (TPO), the long sought physiological regulator of platelet production. His laboratory made many contributions to the field of hematopoiesis before switching its focus to the Hedgehog pathway in the late 1990s. His work led to the development of vismodegib, the first Hedgehog Pathway Inhibitor approved for the treatment of metastatic or locally advanced basal cell carcinoma (BCC). Dr. de Sauvage has recently turned his attention to studying the role of intestinal stem cells in tumorigenesis. In 2011 he received the Achievement in Advancing Targeted Therapies for Cancer & Melanoma Award from the American Skin Association in recognition of his work for patients with BCC. He was elected a fellow of the American Association for the Advancement of Science in 2016.