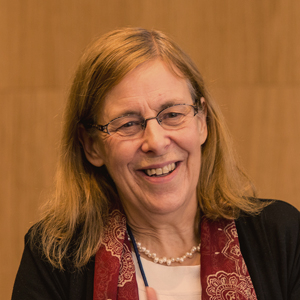 Janet Thornton leads a small research group at EMBL-EBI on computational biology. She has published almost 500 scientific papers. See http://www.ebi.ac.uk/research/thornton. The goal of her research is to understand more about how biology works at the molecular level, with a particular focus on proteins, especially enzymes, and their 3D structure and evolution. With her group she explores sequence variation between individuals in different contexts, its relationship to diseases and for different species. To understand more about the molecular basis of ageing in different organisms, the group has a strong collaboration with experimental biologists at UCL, where they analyse functional genomics data from flies, worms and mice and, by developing new software tools, relate these observations to effects on life span.

From 2001-2015 Janet was Director of the European Molecular Biology Laboratory - European Bioinformatics Institute on the Wellcome Trust Genome Campus at Hinxton, near Cambridge, UK. Janet also coordinated the ELIXIR preparatory phase (2006 – 2013) to build a pan-European infrastructure for life science data. This is now an international infrastructure with 17 member countries.