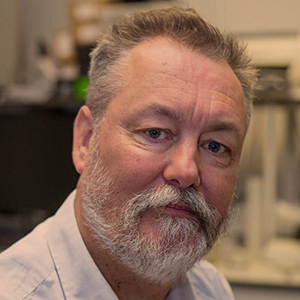 Kees Jalink studied biology, archeology and electrophysiology in Leiden, the Netherlands and carried out his thesis work in the lab of prof W. Moolenaar, where he co-discovered lysophosphatidic acid as a receptor agonist. Following a postdoc in the labs of prof C. Zuker and R.Y. Tsien, both at Ja Jolla, California, where he worked on phototransduction and witnessed the birth of FRET with fluorescent proteins, he started his own group at the Netherlands Cancer Institute. Employing advanced functional imaging and other biophysical techniques, his group studies cell signaling events with high spatial and temporal resolution. Electrophysiological (e.g. patch clamping), functional imaging (FRET, FRAP, FCCS, FLIM and caged compounds) and super-resolution light microscopy (GS-DIM) are used in research projects in the group as well as in a number of collaborations within and outside our institute. Some of his technological contributions include the development of hardware, software for FRET detection, and novel functional imaging paradigms. FRET sensors developed by the Jalink lab, including those for PIP2 and cAMP, are among the most-used in literature. Jalink has been a long-term collaborator and beta-tester for Leica, and also holds advisory functions for other microscopy- and pharma companies. Since 2014 he holds a chair as professor in Super Resolution and Functional Imaging at the University of Amsterdam.