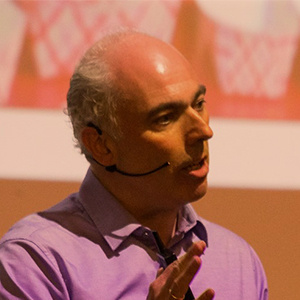 Koen Kas is a healthcare visionary driven by the aim to make healthcare delightful, personalised, and ultimately preventive. He recently published his vision in a book ( “Sick no more”), describing how we will evolve to such future. A follow-up, on creating health by delight, is in the making. As founding CEO of Healthskouts and Partner at Healthstartup (a social network of novel health companies), he ideates & facilitates innovative disruptions in healthcare, organises hackatons, and creates novel digital health startups. Koen serves on the Scientific Advisory Board of a numerous life sciences companies & investors. He has over 180 international keynotes under his belt, including for many Fortune 500 companies.

With Healthskouts, he helps corporates to unlock unknown unknowns, via an expert-curated, self-learning newsletter with innovation & business development suggestions & insights. These sprout from the latest research & technology breakthroughs, emerging startups, design ideas & business models from within & outside of healthcare. Healthskouts is developing Baseline Health, a datascience tool that based on any real world data available which can be linked to healthy lifespan (lifestyle, environment, omics), aims to start making sense of what digital health & genomics tools try to tell us monitoring our health.

Koen is guest professor Molecular Oncology at the University of Ghent, Belgium, and chairs the scientific committee of the European Cancer Prevention Organisation. He is editor of the mHealth Journal & the European Journal of Cancer Prevention.
Before, Koen spent 15 years in Executive positions at 4 leading biotech companies, combining that with academic cancer and omics research. As CSO Oncology of Thrombogenics he helped spin out Oncurious, which recently obtained it’s IND to start clinical trials with a pediatric brain tumour drug. Koen was earlier founding CEO & CSO of Pronota, a protein biomarker company committed to better diagnosis and personalized medicine in the areas of ovarian cancer, preeclampsia, cardio-renal failure & sepsis. He was, prior to that Director drug discovery at Galapagos, one of the leading European life-sciences companies. Previously, he set up and directed the Cancer drug discovery program at Tibotec (now Johnson & Johnson).

He received his PhD degree in Biomedical Sciences from the University of Antwerp where he also obtained a degree in Business Administration. In 1999 he was appointed professor at the University of Leuven, Belgium and lecturer at Harvard University, Boston, USA. He is author of over 60 publications in international journals in the field of cancer, biomarkers, human genomics and proteomics. He authored over 20 patents and patent applications. He is a member of different scientific societies and received prestigious awards from NATO and the Collen Research Foundation and from the Royal Belgian Academy of Sciences and the Belgian Royal Academy of Medicine.

He started his career, as a VIB PI at the Center of Human Genetics in Leuven, elucidating the molecular basis of salivary gland tumors and the hereditary endocrine tumor syndrome MEN1.