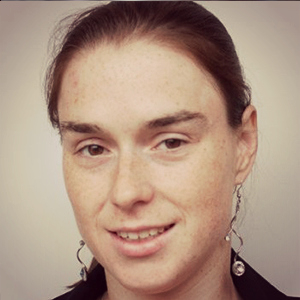 Liesbeth van Oeffelen (1983) obtained the degree of Candidate in Music in 2004, M.Sc. in Electrical Engineering in 2006 and PhD in Bioengineering Sciences in January 2015.

During her master thesis and PhD research, she worked on several research projects related to protein-DNA binding. She performed in silico analyses of protein-DNA interactions, detecting genomic binding sites using position weight matrices and binding constants corresponding to cooperative protein binding along the DNA. Next, she developed software to determine protein-DNA binding constants based on autoradiographic films of electrophoretic mobility shift assays. With this software, binding constants could be determined relatively accurately, resulting in position weight matrices that led to reliable detection of genomic binding sites in ChIP-chip data. Furthermore, Liesbeth developed a first prototype of a novel device that will enable characterization of biomolecular interactions in solution, such as protein-DNA and protein-protein interactions, using nanopores through silicon chips. This device holds the promise of less than 1 hour measurements, without any surface immobilization, and at a fraction of the cost of common SPR devices.

Liesbeth created a business plan around this device via business plan competitions (Battle of Talents 2014, 2nd prize, Bizidee 2015, 5th prize) and incubation at Startit@KBC and Starterslabo. In November 2015, she founded BiosenSource, a spin-off from VUB and IMEC, aiming to further develop the device into a commercial product.