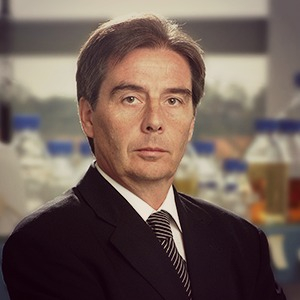 Mark Vaeck has more than 25 years of experience in the biotech and pharma industry and has raised over €80 million in equity financing. In 2008, he co-founded the biopharmaceutical company Complix (Belgium) and was appointed as its CEO in May 2010. Before that, from 2006 until 2010, he was the founding CEO of ActoGeniX (Belgium). From 2001 until 2006, he was the CEO of Ablynx (Belgium), which he co-founded in June 2001. Prior to joining Ablynx, Mark was Chief Operating Officer of Ceres Inc. (US), a NASDAQ listed company that develops innovative technologies for biofuel production. From 1993 until 1998, he served as Director Business Development and thereafter as CEO of Keygene (The Netherlands). Between 1983 and 1993, he held several management positions in the biotech and pharma industry, including Director Business Development at EuroCetus (Chiron Corp.), Manager Licensing at UCB Pharma, and Manager Business Development at Plant Genetic Systems.