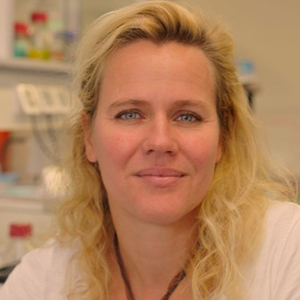 M.C.Morris obtained her PhD in Biology and Health Sciences at the University of Montpellier, France in 1997 and completed her postdoctoral training at the Scripps Research Institute, La Jolla, USA. In 2000, she was hired by the CNRS and returned to the Centre of Research on Macromolecular Biochemistry in Montpellier, France. In 2005 she established her own research group and in 2010 she was promoted CNRS Research Director. In 2014 she moved to the Institute of Biomolecules Max Mousseron, where she is currently in charge of the "Kinase Biosensors and Inhibitors" within the Department of Amino Acids, Peptides and Proteins for Health.

She holds a strong background in cell cycle biology and cancer with longstanding interest in the biological functions and molecular mechanisms of regulation of protein kinases, and a strong interest in therapeutic targeting of cyclin-dependent (CDK/Cyclin) kinase dysregulation in cancer. She has established experience in peptide and protein biochemistry, in fluorescence spectroscopy to study protein/protein interactions, in cell biology and fluorescence imaging technologies. Her group has strong expertise in protein kinase expression and purification, in the design and development of fluorescent kinase activity biosensors and peptide-based nanoparticle delivery systems (Morris et al. Nat. Biotechnol. 2001). Over the five past years, her group has pioneered the development of a family of environmentally-sensitive fluorescent polypeptide biosensors that report on CDK/Cyclin kinase activities (Van et al. ChemBioChem 2014; Prével et al. BSBE 2016, Peyressatre et al. in revision) and further developed conformational biosensors implemented to high-throughput screening assays for identification of allosteric inhibitors (Pellerano et al. Biotechnology J. 2017, Prével et al. Eur.J.Med.Chem.2014).

She was awarded the CNRS Bronze Medal in 2006 and the « Chercheuse d’Avenir » (Scientist of the Future) Award from Languedoc-Roussillon Region in 2009. She has published 67 articles in peer-reviewed journals, 18 contributions to scientific volumes, 8 PCT patents, and has edited a volume on Fluorescent Biosensors (Elsevier Press) in 2013 and a special issue on Fluorescent Biosensors in Biotechnology Journal in 2014 (H-factor 28 ISI Web of Science, Total citations : 4156 / Researcher ID J-5940-2016 / Orcid N° 0000-0001-8106-9728.)

Editorial Board Member of ChemBioChem since 2010 and Frontiers in Chemistry since 2015. Member of ASBMB and the French Fluorescent Biosensor Workgroup (GDR2588). Active member of French Women in Science since 2008, and Council Board Member since 2013. She established the first Mentoring Programme for Female Doctoral students at the University of Montpellier, which became fully recognized in 2015.