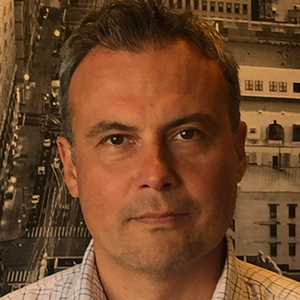 Olivier Feron is FRS-FNRS Research Director and Full Professor at the University of Louvain in Brussels, Belgium. After a PhD in Molecular Pharmacology at UCLouvain, he was trained at Harvard Medical School and the Brigham and Women’s Hospital à Boston in Boston, USA first as post-doctoral fellow and then as Instructor in Medicine. Back in Belgium, he established his own laboratory progressively shifting the focus of his research from cardiovascular diseases to oncology. Cross-fertilization between these fields was instrumental in the identification by his lab of caveolae as unique signaling platforms involved in the regulation of endothelial NO synthase activity, angiogenesis and lipoprotein metabolism. This mixed expertise was also key to demonstrate the potential of a variety of vasomodulatory compounds to improve the efficacy of chemo- and radiotherapy.

Today, Olivier Feron is head of the Cancer Translational Research Laboratory at the Institut de recherche expérimentale et clinique (IREC) of UCLouvain. Among the most recent discoveries of O. Feron's research group are the link between cycling hypoxia and tumor progression, the role of lactate as a key actor of tumor metabolic symbiosis and the metabolic shift from glucose toward glutamine and fatty acids in response to tumor acidosis. Together with local chemists and biotechs, the lab of O. Feron is also involved in several drug discovery programs aiming to identify and validate new lead compounds targeting tumor metabolism and stimulating anticancer immunity.

Olivier Feron is recipient of several awards including the Galien prize, the Eugène De Somer prize, the Lambertine Lacroix prize and the Tytgat prize. Olivier is editor-in-chief of the Journal Frontiers in Pharmacology of Anti-Cancer Drugs and one of the youngest Belgian scientists elected to the Royal Academy of Medicine.