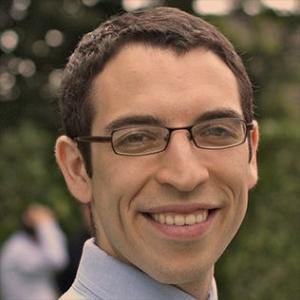 Nicolas Lux Fawzi uses and develops approaches to understand the molecular details of dynamic, high molecular weight assemblies. As a postdoctoral fellow in the group of Marius Clore, he developed dark-state exchange saturation transfer (DEST) a solution NMR approach to observe for the first time the protofibril-bound states of amyloid β (Fawzi et al. Nature, 2011). As a graduate student in the group of Teresa Head-Gordon, his work focused on using computer simulation combined with experiment to observe the atomic details of amyloid β structure and interactions. Most recently, his group has characterized the assembly of a stress granule associated protein Fused in Sarcoma (FUS) into models of ribonucleoprotein granules. These granules are only one example of membraneless organelles, ubiquitous but poorly understood cellular compartments that have long been observed in cells by microscopy. However, the connections between assembly via phase separation of putatively disordered domains and these physiological structures have only been made in the past few years. The work from the Fawzi group are the first published report indicating that the disordered domains of RNA-binding proteins, even those that are classified as aggregation-prone and prion-like, can remain predominantly unstructured even when assembled into granules. Furthermore, these structures are proposed to be “crucibles” for the formation of RNA-binding protein inclusions in neurodegenerative disease, underscoring the importance of visualizing the structural details of these assemblies.