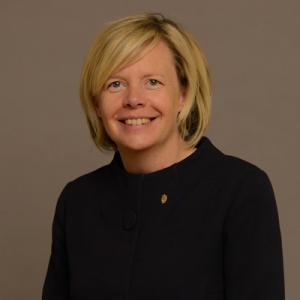 Séverine Vermeire obtained her MD degree at the KU Leuven in 1995 and a PhD at the same University in 2001 on “Genetic Polymorphisms and Serologic Markers in Inflammatory Bowel Disease”. She further trained at the Universidad Nacional de Asuncion, Paraguay (1993), at the Wellcome Trust Centre for Human Genetics , University of Oxford (1997-1998) UK and at the Montreal General Hospital (McGill University) in Canada (2000–2001). Since 2003 she is staff member at the Gastroenterology Department of the University Hospitals Leuven and is appointed Full Professor of Medicine at the KU Leuven. Since 2016, she is Head of the Department of Chronic Diseases, Metabolism & Ageing (CHROMETA) at the KU Leuven.

Dr Vermeire is actively involved as principle investigator in RCTs with new therapeutic compounds and has been lead investigator on several of these programs. Her scientific work resulted in more than 500 peer-reviewed articles so far and focusses on the role of the microbiome and genetic susceptibility in IBD and on identifying predictive signatures of treatment response. Dr Vermeire participated in the International iCHOM consortium on development of Patient-Centered Outcomes for Inflammatory Bowel Disease.