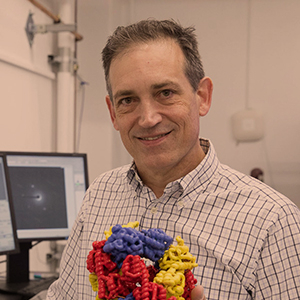 Yeates earned his Bachelor’s degree at UCLA in 1983 and then his PhD in 1988 while doing research under the direction of Prof. Douglas Rees. There he helped determine the crystal structure of the bacterial photosynthetic reaction center as part of a team racing to determine the first crystal structures of membrane proteins. He moved to The Scripps Research Institute to do postdoctoral research on the structure of poliovirus with Prof. James Hogle. Yeates returned to UCLA in 1990 to join the Faculty in the Department of Chemistry and Biochemistry. His interdisciplinary research, combining molecular biology with computing and mathematics, has focused on macromolecular structure, computational genomics, and protein design. His early research findings include: an explanation for why proteins crystallize in certain favored space groups; the development of equations for detecting disorder in x-ray diffraction data from protein crystals; the discovery of thermophilic microbes rich in intracellular disulfide bonds; and the development of comparative genomics methods. In recent work the Yeates laboratory has elucidated the structures and biochemical mechanisms of extraordinary protein-based organelles in bacteria, including the carboxysome and other metabolic microcompartments whose shells are assembled from thousands of protein subunits. The Yeates laboratory pioneered principles and methods for designing novel geometrically sophisticated protein assemblies, originally dubbed ‘nanohedra’, ranging in form from cages to extended materials. Designed protein cages are currently being exploited in diverse applications, including most recently as a framework for cryo-electron microscopy scaffolding to allow the visualization of individual protein molecules at near-atomic detail. Yeates is currently the Associate Director of the UCLA-DOE Institute for Genomics and Proteomics.