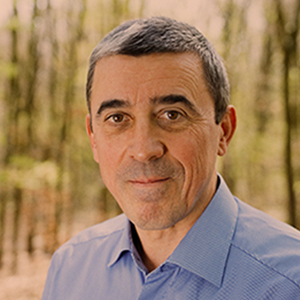 Dr. Peter Carmeliet is head of the Laboratory of Angiogenesis and Vascular Metabolomics and former director of the VIB — Vesalius Research Center, at the University of Leuven in Belgium. He graduated as Doctor in Medicine in 1984, and completed his Ph.D. in Medicine in 1989. During his Postdoctoral work at the Whitehead Institute, MIT in Cambridge USA, he acquired the knockout technology. After his return to Leuven in 1992, Dr. Carmeliet started his own research group with a focus on how blood vessels grow (angiogenesis) in health and disease. By developing transgenic mice lacking VEGF, he discovered that VEGF is a key player in angiogenesis. Dr. Carmeliet's findings have led to the (pre)clinical development of novel therapeutic strategies for angiogenic diseases. He also showed that PlGF is a disease—restricted candidate in many angiogenic disorders and tested the therapeutic potential of anti-PlGF.

Dr. Carmeliet published over 662 research articles, reviews and book chapters (> 75.650 citations, h-index: 129). He is recognized as one of the top 400 most influential scientists in biomedical research. He has been elected member of the Royal Netherlands Academy of Arts and Sciences (KNAW), the European Molecular Biology Organization (EMBO) and the German Academy of Science Leopoldina and the European Academy of Sciences (eurasc). In 2010 he was awarded Doctor Honoris Causa from the Johann Wolfgang Goethe University, Germany. His achievements have been recognized by several honors and awards, such as the the Heineken Prize for Medicine (2018), ARC Foundation Léopold Griffuel Award (2018), the Blaise Pascal Medal in Medicine and Life Sciences by the European Academy of Sciences (2011), Ernst Jung Medical Award (2010), the FWO Joseph Maisin Prize for Excellence in Fundamental Biomedical Research (2010), the ERC Advanced Research Grant (2010), the Francqui Chair, Brussels (2007, 2006), the Interbrew Baillet Latour Health Prize (2005), the Outstanding Investigator Award from the International Society of Heart Research (2002) and the Marion Barnhart Memorial Award (1995). In 2015 he was granted the noble title of Baron by King Filip of Belgium.

Dr. Carmeliet documented that low VEGF levels in mice and in humans cause motorneuron degeneration, similar to patients suffering the incurable disease amyotrophic lateral sclerosis (ALS) (2001). These studies not only provide evidence for a role of VEGF in neurodegeneration, but also opened therapeutic opportunities, which have resulted in clinical tests of VEGF delivery for ALS patients.

The Carmeliet lab is currently studying how endothelial cells change their metabolism during vascular branching and exploring the therapeutic potential of targeting endothelial metabolism for anti-angiogenic strategies. The role of several key metabolic enzymes in endothelial cell biology and angiogenesis in vivo are under investigation