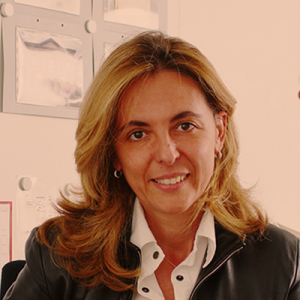 Federica Sallusto received the degree of Doctor in Biology from the University of Rome in 1988, and performed postdoctoral work at the Istituto Superiore di Sanità in Rome and at the Basel Institute for Immunology, where she was a member from 1997 to 2000. Since 2000 she is Group leader of the Cellular Immunology Laboratory at the Institute for Research in Biomedicine in Bellinzona where she has also established the Center of Medical Immunology. Since 2017, she is Full Professor in Medical Immunology at the ETH Zurich and at the Università della Svizzera italiana. Among her original contributions are the development of a method to culture human dendritic cells, the discovery that human Th1, Th2 and Th17 cells express distinct sets of chemokine receptors, the definition of central and effector memory T cell subsets, of skin-homing Th22 cells and of non-classic Th1* cells and the characterization of two distinct types of Th17 cells with pro-inflammatory and regulatory properties. She also developed a method for the analysis of human naïve and memory T cell repertoires based on high throughput cellular screenings of expanded T cell libraries that has been instrumental to identify autoreactive T cells in patients with narcolepsy. She is member of the German Academy of Science Leopoldina and of EMBO and is currently President elect of the European Federation of Immunological Societies (EFIS).