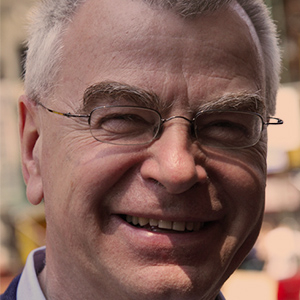 György Buzsáki is the Biggs Professor of Neuroscience at NYU Langone Health. He received his M.D. in 1974 from the University of Pécs in Hungary, then earned his Ph.D. in Neuroscience in 1984 from the Academy of Sciences in Budapest. Buzsáki’s primary interests are mechanisms of memory, sleep and associated diseases. His main focus is “neural syntax”, i.e., how segmentation of neural information is organized by the numerous brain rhythms to support cognitive functions. His is best known for his groundbreaking two-stage model of memory trace consolidation, which demonstrates how the neocortex-mediated information during learning transiently modifies hippocampal networks, followed by reactivation and consolidation of these memory traces during sleep. To achieve these goals he has introduced numerous technical innovations from using silicon chips to NeuroGrid to record brain activity.

Buzsáki is among the top 1% most-cited neuroscientists, member of the National Academy of Sciences USA, the Academiae Europaeae and the Hungarian Academy of Sciences, Fellow of AAAS and he sits on the editorial boards of several leading neuroscience journals, including Science and Neuron; honoris causa at Université Aix-Marseille, France and University of Kaposvar, and University of Pécs, Hungary.