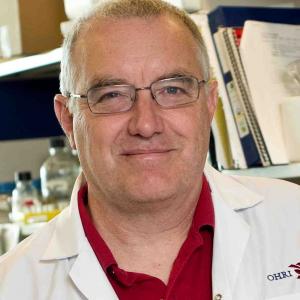 Dr. John Bell received his PhD from McMaster University in 1982. The three years that followed, he trained as a post-doctoral fellow at the University of Ottawa and then at the Medical Research Council in London, England. Dr. Bell began his independent research career at McGill University in 1986 and moved to the University of Ottawa, Department of Medicine, in 1989. He is a member of the Center for Cancer Therapeutics at The Ottawa Hospital Cancer Center, a Senior Scientist with the Ottawa Hospital Research Institute and Professor of Medicine at the University of Ottawa. He heads the Canadian Oncolytic Virus Consortium, a Terry Fox funded group from across Canada that is developing virus based cancer therapeutics and is the Director of the Biotherapeutics Program for the Ontario Institute for Cancer Research. He is the Scientific Director of the National Centre of Excellence for the development of Biotherapeutics for Cancer Therapy and is a fellow of the Royal Society of Canada.