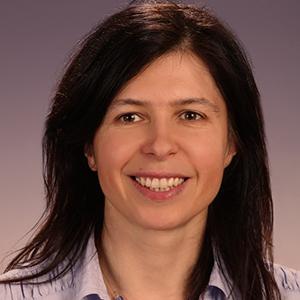 Monika Fuxreiter is a computational biologist, professor at the Department of Biochemistry and Molecular Biology, Faculty of Medicine, University of Debrecen, Hungary. She graduated as a quantum chemist (Eötvös University, Budapest) and was a postdoctoral fellow with the Nobel prize laureate Arieh Warshel (USC, Los Angeles). She was a visiting scientist at the Weizmann Institute (Israel) and Laboratory of Molecular Biology, MRC (Cambrige, England). Since 2003 she has been working on intrinsically disordered proteins (IDPs). Monika Fuxreiter uncovered partner recognition mechanisms of IDPs (e.g. preformed element, linear motifs). Her key discovery was the concept of ‘fuzzy’ complexes, where the disordered state persisting in protein complexes impacts biological activity. She has revealed the molecular basis of fuzziness and related it to context-dependent protein functions. Recently, fuzziness was found to be a critical feature in higher-order assemblies. Monika Fuxreiter has received many academic awards, including the L’Oral-Unesco “Women for Science” medal.