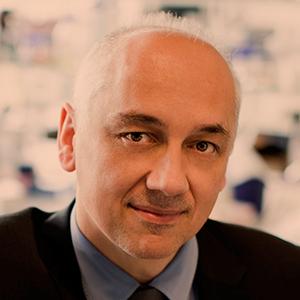 Peter Tompa received his PhD in biochemistry and enzymology from ELTE University, Budapest in 1991. Currently, he is the professor of biochemistry at the VUB (Free University Brussels), and also the professor of biochemistry and protein sciences in the Institute of Enzymology, Research Centre for Natural Sciences, Hungarian Academy of Sciences, Budapest, Hungary. He has research groups both in Brussels and Budapest. His research focuses on intrinsically disordered proteins (IDPs): he played an active and decisive role in the rise of this field by suggesting a functional classification of IDPs, observing the role of structural disorder in chaperone function and developing basic concepts of the unusual modes of function of IDPs (such as moonlighting, fuzziness, disordered domains, super tertiary structure, multisteric regulation, conformational signaling, etc…). He published the first monograph of the IDP field “Structure and function of intrinsically disordered proteins” (2009), and organized the first conference on IDPs, the EMBO workshop “Intrinsically unfolded proteins: from structure to function” in Budapest, Hungary (2007).